Walmart will now allow shoppers to purchase Bitcoin in select Coinstar kiosks across the country. The US retail giant looks forward to expanding the cryptocurrency service to serve more customers. 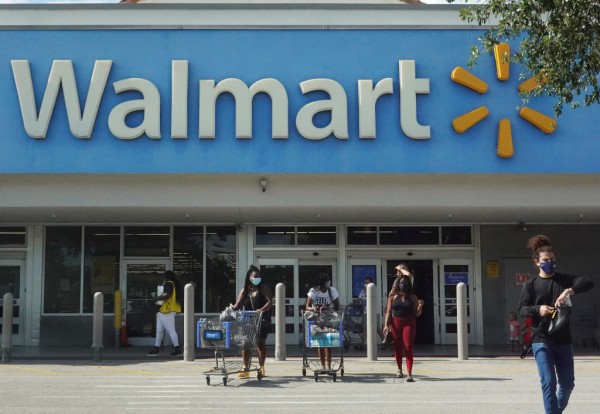 (Photo : Joe Raedle/Getty Images)
HALLANDALE BEACH, FLORIDA – MAY 18: People wearing protective masks walk from a Walmart store on May 18, 2021 in Hallandale Beach, Florida. Walmart announced that customers who are fully vaccinated against Covid-19 will not need to wear a mask in its stores, unless one is required by state or local laws. The announcement came after the Centers for Disease Control and Prevention said that fully vaccinated people do not need to wear a mask or stay 6 feet apart from others in most cases, whether indoors or outdoors.

Coinstar, a popular company for its coin-cashing machines, sought a partnership with the digital currency exchange Coinme. Together, the collaboration aims to build Bitcoin ATMs for over 8,000 kiosks.

In the meantime, Walmart has included 200 kiosks in its recent pilot test.

According to BitOoda chief strategy officer Sam Doctor, Bitcoin ATMs have been used previously in some supermarkets in the US.

Head of research at the cryptocurrency brokerage said that the retailer plans to launch more Bitcoin services soon. This would also lessen the doubts of those who are skeptical about Bitcoin’s legibility.

Before the pilot test for Coinstar kiosks started, Walmart had been a subject of crypto hoax last month, Reuters reported on Friday, Oct.22. At that time, a fake release announced that the company was done dealing with Litecoin.

Later, it was confirmed that the news about the partnership was bogus. Walmart said that it would continue to explore cryptocurrency in some of its future missions.

For the shoppers to access the Bitcoin ATMs, they should first have a Coinme account and successfully pass the test to redeem the voucher. Moreover, the Bitcoin option would charge the user at 4%. On the other hand, the cash exchange fee will be 7%, according to CoinDesk.

While the massive rollout of crypto ATMs continues, there are still some concerns about using them. According to DigitalMint’s compliance director Seth Sattler, money laundering could arise in this adoption.

Additionally, users who are just starting out with cryptocurrency are likely to encounter scammers and money mules.

Cryptocurrency ATMs Are All Over the World

In May, Tech Times reported that 355 new crypto ATMs were launched across the United States. Bitcoin Depot wanted to spread its service in 40 states in the country.

The same firm said that 155 crypto machines were launched back in March. Before being allowed to use the ATM, the user should have a phone number as part of the verification process.

This year, the company was rooting for an expected growth of 200%. The objective also means that it would allow more cryptos in the transactions. These include the most famous digital currencies in the world, such as Ethereum, Litecoin, and Bitcoin.

At the time of the report, there were around 19,000 crypto ATMs worldwide.

In June, El Salvador allowed the installation of 1,500 crypto ATMs. All adults in the country were set to receive cryptocurrency worth $30.

« Cryptocurrency Coins Exchange Fees Are A Mess. When Will They Ever Improve?
Hackers Leverage Phishing Strategy On YouTubers To Run Cryptocurrency Scams »